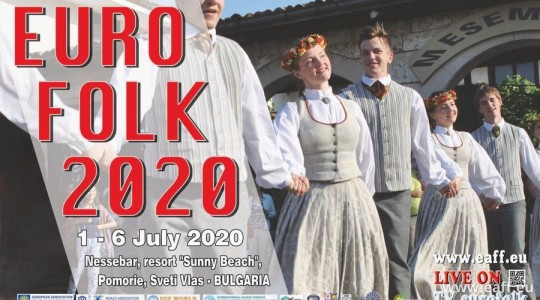 7.02 is the is the deadline for you to declare your desire to participate in the upcoming six-day adventure called the European Championship of Folklore "Euro Folk 2020".

From July 1 to 6 Nessebar, Sunny Beach, Pomorie and St. Vlas will host the XII edition of the Championship, which brings together the traditions of the second smallest and third most populous continent.

The forum will provide the opportunity for folklore ensembles, singers and dance groups, choirs and orchestras from different countries to perform on the stages of the most beautiful resorts on the Bulgarian Black Sea coast. A distinctive feature of the chain of festivals, part of which is the European Championship of Folklore, is the recording of performances with professional audio and television equipment and broadcasting them via the streaming platform “EurofolkTV”.

The most impressive folklore interpretations will also be featured in the reviewed musical documentary, which will be broadcast repeatedly on cable and satellite.

You can see the event of the past year within the one-hour production of Eurofolk TV, presenting interesting interviews, related to the performing 1000 singers, dancers and musicians, the official ceremonies on opening and closure of the Championship, curious details about international groups from Moldova, Ukraine and Uzbekistan, as well as specially award-winning groups.

The Championship is competitive, and the big award that the organizers provide is Grand Prix “Golden Opheus”, gold medal and  Diploma for the Absolute European Champion of Folklore for 2020, as well as a cash prize of 1,000 Euro. You have a great chance of being honored with many more special awards.

The event is organized by the European Association of Folklore Festivals – EAFF, Euro Folk Academy and Event Vacation.

The magic of traditional folk arts comes to life in the new promotional video of the forum, that will bring you into the unique atmosphere, that the event guarantees.

Hurry to declare your desire to participate in the XII-th edition of the European Championship of Folklore "Euro Folk 2020" as many groups from Cyprus, Moldova, Romania and Bulgaria have already done!